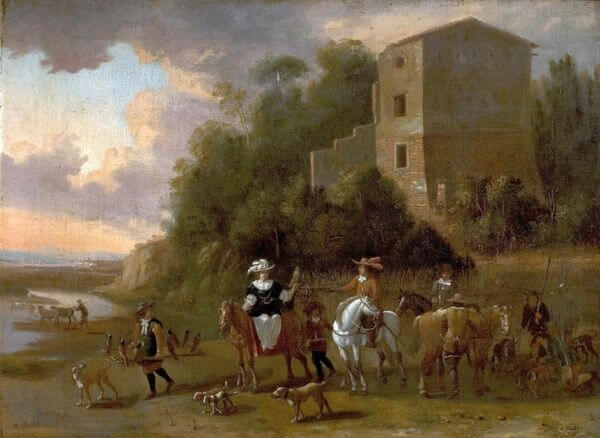 The Stuart era to the mid-20th Century

At the beginning of the Stuart dynasty, falconry was still one of the favoured and fashionable hunting sports, and was also still used as a way of providing game for the table. Sir Thomas Shirley’s 1603 “A Short Discourse of Hawking to the Field” and Edmund Bert’s “An Approved Treatise on Hawks and Hawking”, published in 1619 (a book dedicated to flying the goshawk), were both written when the practice of falconry was still in its heyday.

However, the Civil War of the 1640s led to a massive increase in the manufacture of firearms. When peace returned, the country was ruled by Puritans who considered hawking, and many other pastimes, to be just the frivolous pursuits of the defeated aristocracy, and as many more people could now afford a gun to bring game to their kitchens, which was much easier than training hawks for the purpose, the sport of falconry just fell out of fashion.

Although a few of the upper class gentlemen (and a few ladies) continued to fly falcons from the mid-1600s until the early 1800s, the sport almost, but not quite, disappeared.

During this period, the gun evolved from something used to bag a stationary pheasant, rabbit or duck, to a sophisticated weapon capable of instantaneous detonation, with the ability to bring to earth two flying birds with consecutive shots.

This of course meant that shooting became more than just a way of putting game in the pot. It turned into a way of demonstrating the shooter’s skill, or even a mark of their nobility.

In order to be able to show this, the provision of more and more game became necessary. Gamekeepers were employed, who had to preserve as much game as possible for their masters and their master’s guests. Anything which was believed to threaten their gamebirds was ruthlessly deterred, whether these were raptors, or corvids, or indeed any predator on four legs or even two.

The goshawk particularly was heavily persecuted, becoming very scarce by the late 18th Century, and rendered extinct in Britain around a hundred years later. Almost no falconers flew goshawks between the 1650s and the 1950s. Anyone flying, and particularly losing, any trained hawk or falcon had the added risk of their bird being shot before they could call it in or recapture it.

In the early 19th Century, there was a small revival in the sport, with a few clubs being formed. These were a little like modern-day foxhunting packs, where people subscribed to the club, which in turn employed professionals to show sport to the club members. In most cases the club members never actually flew falcons themselves, but rather saw them flown by the professional falconers. The clubs were dedicated to flights at the red kite and the heron, with everyone enjoying the chase on horseback, again in a similar way to fox hunting. From the mid-19th Century until the First World War, the Hawking Club (later known as the Old Hawking Club) provided sport for its members on Salisbury Plain, rook hawking for a few weeks every year in the springtime.

After the Great War, the British Falconers’ Club was formed. This was no longer a club providing sport for its members, but was a club of largely amateurs who flew their own hawks, or were friends of those who did. Just a very few people continued to own and hunt with hawks and falcons. At the first Game Fair in 1958, the secretary of the BFC stated that the club had some 120 members, but only about 25 of those were practising falconers. So it remained until the 1960s, when there was a revolution in the sport of falconry.