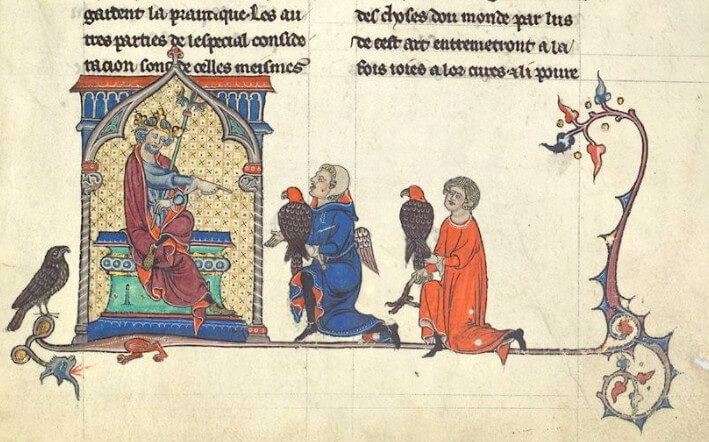 How old is falconry?

Falconry is defined as the sport of taking wild quarry, by the use of trained birds of prey. We know from tomb paintings that the sport was well established and practised in China at least two thousand years ago, and it is thought by some that it may well be four thousand years old or more.

The art of falconry was probably brought to Britain in the 7th or 8th century by European invaders, and hawks were signs of status as well as being used as a means of catching game birds and waterfowl for food.

There are many references to hawking in literature and illustrations in these early times, such as from the Anglo-Saxon epic poem of the Battle of Maldon, which took place in 991 CE. The chieftain Byrhtnoth symbolically releases his hawk to the woods before the battle commences:

Even in the Bayeux Tapestry we see William in 1066 sailing towards the British coast complete with hawks and hunting dogs, so he was obviously intending to have some time for fun, whether or not he was victorious at Hastings!

The goshawk, with its size, speed and agility, was supreme for the purpose of hunting the pheasant, partridge or duck, and so was used extensively for hunting in Britain for close to 900 years.

In Medieval times, the goshawk became known as “la cuisiniere”, or “cook’s hawk” but was in fact flown by all classes of people from the yeoman up to the king. Hawks were, of course, taken from the wild, and their nests and nest sites were jealously guarded.

Things were about to change, and for the privileged few, a new and exciting form of the sport reached Britain’s shores. From the 12th century onwards, crusaders on their campaigns in the Middle East saw falcons being flown at quarry. These came to be known as “longwinged hawks”, or “hawks of the tower” because of their towering or high flight.

These flights provided a much greater spectacle for the onlooker, and of course this quality of flight will also result in fewer quarry caught. There was also much more chance of the falcon being lost, so flights were followed on horseback.

This in turn meant that flying falcons became the province of the wealthy, the nobility and royalty, and in Medieval times, knowledge about falconry and the ability to handle and fly falcons was a mark of status and breeding.

In those days in Britain, the language of the nobility was French, and many of the terms and phrases we use in falconry today come from that time, such as “bechin” and “creance”.

In Tudor times falconry reached its golden age. The flights of the falcons would have been at herons and cranes and at the red kite, as these quarries gave the highest and best pursuits for the delight of the falconers and onlookers, and were known as “le haut vol” – the high flight.

This was 500 years before falcons were domestically bred, so these were wild taken from the nest, known as an eyrie, so are known as “eyasses”. Some were trapped as older birds that had the experience of hunting every day in the wild.

The very best falcons were “haggards”, which were caught showing their mature plumage, so were at least one year old, and had all the expertise of hunting successfully every day, possibly for years. It goes without saying that they were also the hardest to train, and the falconers who could accomplish this were the most admired.

The peregrine is our largest native falcon, and we now know it is the fastest creature on the planet. It was known as the falcon gentle – the noble falcon – and was the most used for hunting by the aristocracy of Britain and Europe.

Ladies were also often known to fly the dainty merlin, and falcons were brought from far-flung countries to be trained and flown in Britain – the saker from the east, the lanner from Africa, and the biggest falcon in the world was obtained from the cold and inhospitable lands of the north – the mighty gyrfalcon.